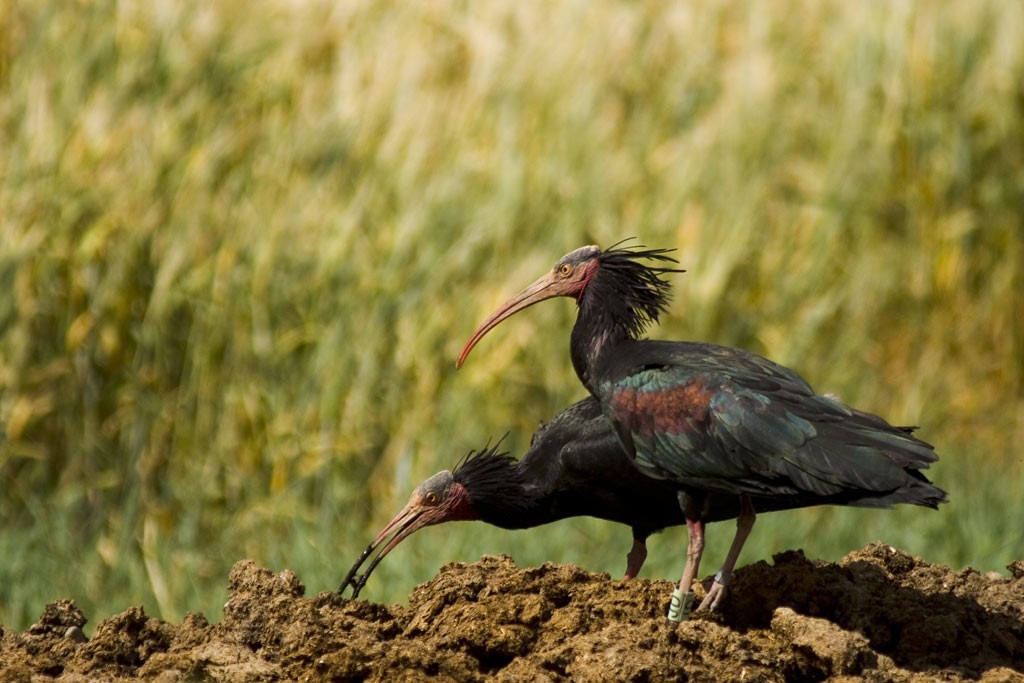 Conservation efforts for the Bald Ibis in Turkey have given good results and the number of Bald Ibis has increased from 25 in 2003 to nearly 200 in 2015.

The Northern Bald Ibis once had an extensive breeding range stretching from Turkey through the Arabian Peninsula and North Africa to Morocco and was even known to breed in parts of central Europe. It is now breeding at only two sites in south-west Morocco, one site in Syria – perhaps it is no longer there – and, in a semi-wild state, at one site in Turkey. Globally, fewer than 500 individuals of these birds remain in the wild. The species has been driven to near extinction by a combination of threats including human persecution, loss of steppe and extensive farmland, pesticide poisoning, human disturbance and large infrastructural development.

In Turkey, the Northern Bald Ibis population declined from about 600 pairs in the early 1950s to 130 pairs in 1962 as a result of the extensive use of DDT. No offspring were produced until 1972, and in 1973 there were only 26 pairs in a single colony at Birecik in south-eastern Turkey. In the 1980s, the Turkish National Park Service decided to prevent the decline of the ibis by taking all surviving birds into semi-captivity. Two large aviaries were built to house these birds throughout winter. Each year, after July, they are kept in these aviaries until February, when they are released to breed in their natural habitat. Urfa Birecik is the only place for the semi-wild Bald Ibis population since the wild population declined to extinction in 1989.

In 2003, when the population fell to 25 individuals, Doga signed a protocol with Nature Conservation and National Parks General Directorate to protect the species. Since then, conservation measures are carried out with the aim of increasing the breeding success of Bald Ibis. Conservation efforts have given good results, and the number of Bald Ibis has increased to nearly 250 in 2018.

The satellite tracking of juvenile birds in autumn 2008 showed that this population retains its migratory instinct, with birds being tracked to Syria and Jordan. This result built hopes for re-establishing the eastern migratory population, the main objective of Doga’s Bald Ibis work. Doga continues to monitor the species in and around Birecik and conducts research in foraging habitats in cooperation with the RSPB. More than a decade, Doga has an active members and volunteers network in Birecik undertaking community-based conservation through raising awareness, education and working against hunting. Doga’s local team also works with refugees for acquiring their support in the conservation of the Bald Ibis and another biodiversity.