We Invite You To Join Sarımazı Raptor Count 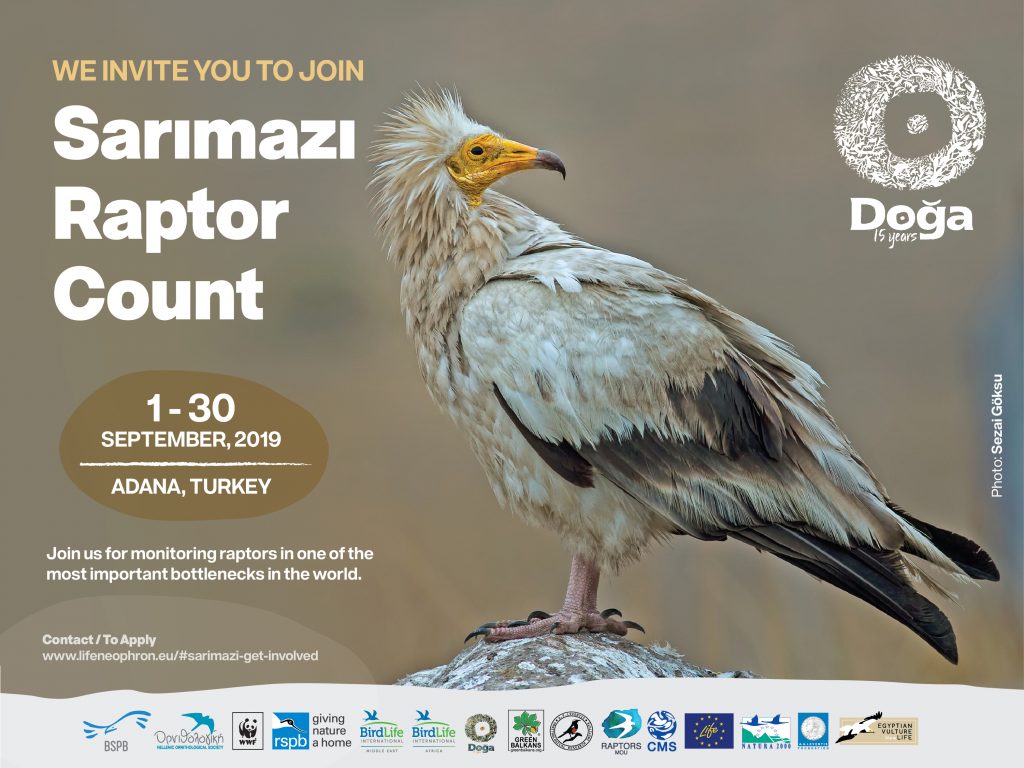 Turkey is home to one of the largest breeding populations of Egyptian Vultures in the world! An estimated 2000 pairs are living in Turkey – that’s around 25% of the global Egyptian vulture population. But also the Egyptian Vulture isa globally endangered scavenger that is dispersed across Southern Europe, Africa, and Asia. Birds from South Eastern Europe migrate via key bottlenecks of Turkey towards their wintering grounds in Africa. A joint pilot work of Doga and BSPB in 2013 revealed a major bottleneck not only for this globally threatened species but also more than a dozen of migratory soaring birds in southern Turkey.

Since 2018 we have established an annual monitoring programme where volunteers can participate and experience the spectacular autumn migration of tens of thousands of eagles, buzzards, kites, and storks.Last year more than a hundred thousand birds were counted. In fall 2019 census of this massive migration will take place near Sarimazi, Adana province, Turkey once more. This monitoring will offer spectacular views of mass migrations of twenty different species of raptors, near 100.000 in count, 100.000 storks and countless other smaller migrants.

We are looking for keen and dedicated birdwatchers with good eyesight and raptor identification skills who want to develop their migratory soaring bird monitoring skills. Physical fitness and preparedness is a must, in order to endure direct sunlight exposure and high heat, daily (7 days a week) for 8 hours at a time; ability to follow established protocols and record data accurately; proficiency with computers and data entry; must be flexible and capable of working independently and as part of a culturally diverse team.

Would you like to join us for monitoring raptors in one of the most important bottlenecks in the world?

For further info and to apply: http://www.lifeneophron.eu/#sarimazi