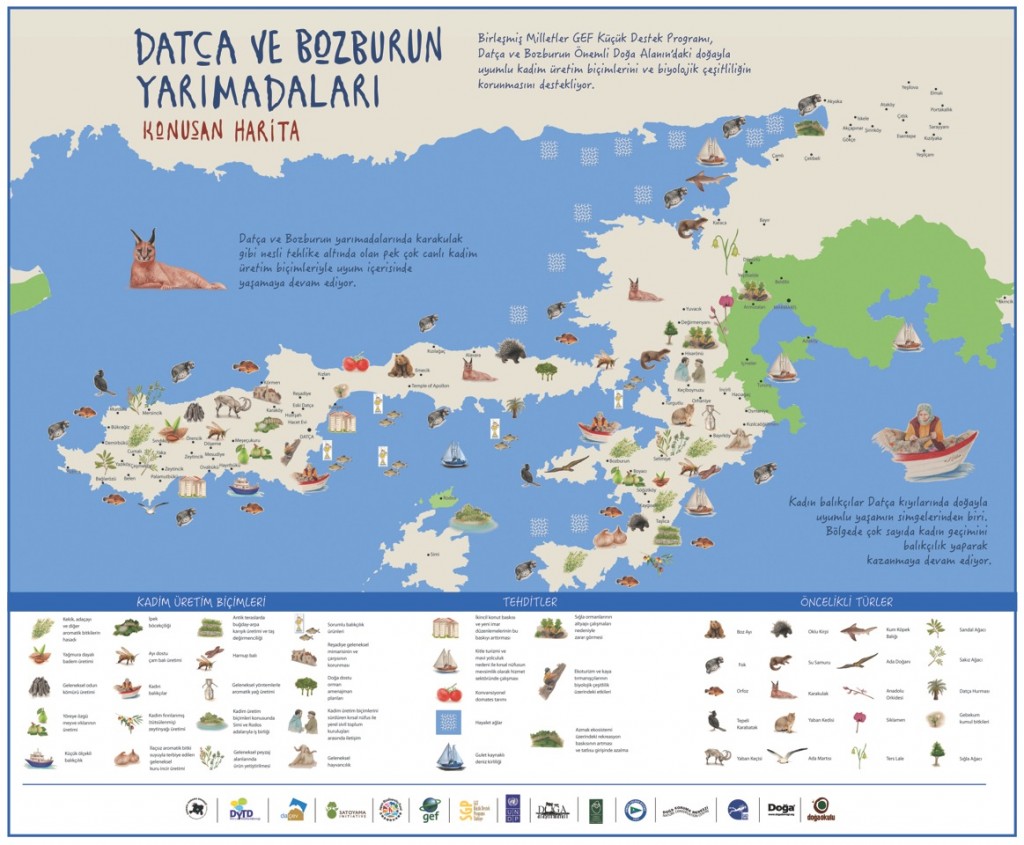 Datça and Bozburun Peninsulas are located in Muğla province, southwest of Turkey. The area is the one of Turkey’s 305 Key Biodiversity Areas (KBA). The KBA hosts one of the least fragmented lowland Mediterranean vegetation in Anatolia. The region’s economy is built on agriculture, fishing and tourism. Important and very diverse rural landscapes are present in the area due to difficult natural conditions of the region for mainstream agriculture. Almond and olive are some of the local agricultural products grown in the region.

Over the last decade, the area’s rural population went through a fast shift to service industries and seasonal tourism, from their original production sectors such as small-scale farming. Therefore, the rich agricultural landscape has started to lose its integrity and diversity. Over the last two years, the Community Development and Knowledge Management for the Satoyama Initiative (COMDEKS) investment in the region has become an extremely important tool to slow down the demise of these landscapes, supporting the globally significant biodiversity and the associated ancient landuse practices in the region.

In 2012, the COMDEKS-SGP strategy was prepared with the coordination of Doğa resulting in nine different projects supported throughout the peninsula. These projects were completed in 2014. Doğa and Seferihisar Doğa Okulu (Nature School) carried out the ex-post baseline assessment of the strategy and linked projects in the second half of 2014. During this evaluation period, thirty project stakeholders were interviewed face to face and 60 people participated in the assessment. Priorities for the coming period were also identified during this period.

In 2015, two new projects in which Doğa is indirectly involved were launced in the region. First project is implemented by Doğa Okulu and aims at establishing a self-sustainable network of civil society groups at the KBA. This will be achieved by a two-stage training program and a set of networking activities strengthening the communication between stakeholders and encouraging participation of civil stakeholders in decision-making. A network that will connect key local stakeholders strategically, as well as on specific issues, will be established during the project run between 2015 and 2016.

The Nature, Culture and Life Society carries out another project in close cooperation with Doğa and Nature School. This project primarily aims at the documentation of the rain-fed indigenous production landscapes in Hisarönü, Bayır, Söğüt ve Taşlıca villages of the Bozburun Peninsula. An inventory and a marketing plan will be prepared for local biodiversity friendly products grown in the unique indigenous production landscapes of the Bozburun Peninsula.