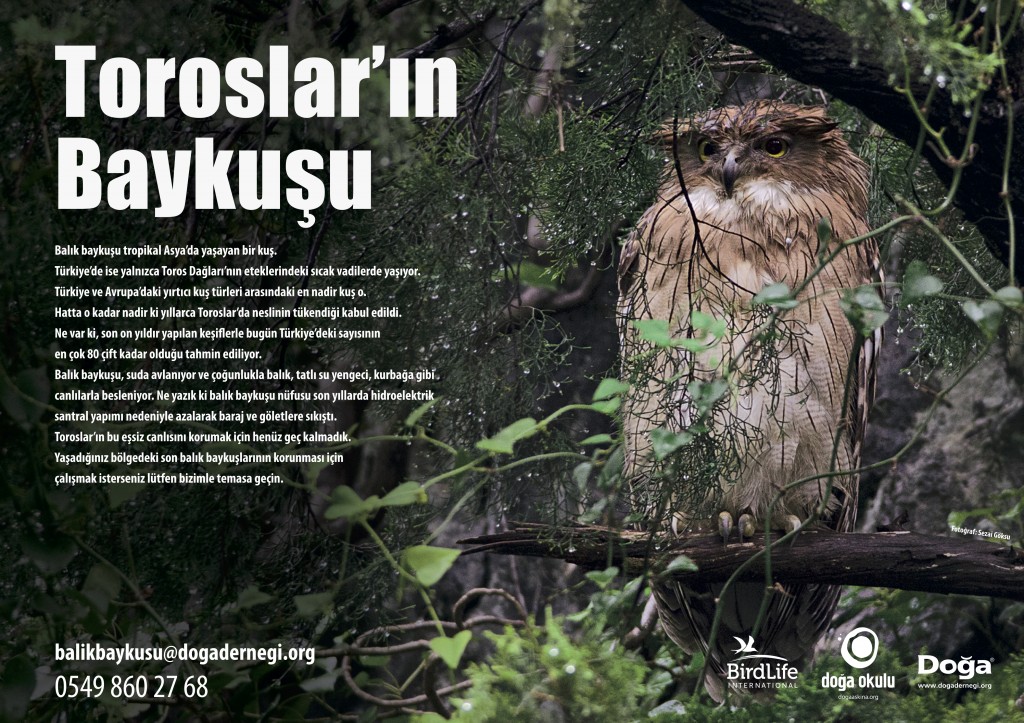 Informative poster of Doğa on Brown Fish Owl with call number for urgent situations and sights.

The Western Palearctic population of Brown Fish Owl has a small and disjunct range, possibly a population with fewer than 80 pairs that are highly threatened and confined to Southern Turkey, and therefore the species is listed as Critically Endangered at the European level. A 2015 publication of Sound Approach describes the Fish Owl population in Turkey as a different species, i.e., Bubo semenowi. The authors argue that this species is a split from Bubo (Ketupa) zeylonensis occurring in Zagros Mountains (Iran) and Taurus Mountains of Turkey. If the preliminary results are confirmed, and the Taurus Mountains birds are to be regarded as a separate species the need for protection will be felt even more as it will be one of the rarest bird species in the world.

The habitat of fish owl consists of steep cliffs in mountainous habitat with huge mature pine trees bordering clean freshwater rivers or pools with crab and fish, which do not freeze over during winter. The species prefers naturally or otherwise formed ponds within slow paced rivers and banks of rivers in deciduous and semi-deciduous forests. The species also prefer hunting at freshwater fish farms established near forest edges. Nests are built in hollows or depressions in trees, rock ledges or steep stream banks, normally near water. Old raptor nests are sometimes used as well.

Yet, it became clear that the species is very hard to find due to its nocturnal behavior and its mountainous habitat is hard to survey. People living in the vicinity of fish owls know the species, but they are unaware of its rarity. People are working at fish farms along rivers where the fish owls occur shoot at piscivorous animals, sometimes, including a fish owl. Furthermore, large infrastructural changes such as dams or logging are noticed in most of the areas where the fish owls occur. In all the sites there are significant threats to the species and its habitat: particularly habitat loss and degradation due to river type Hydro-electricity power plants (HPP), dams and tourism investments.

Doga implemented a series of conservation projects with the support of Sound Approach and BirdLife International to assess the conservation opportunities and threats to the species around known nesting sites. As part of this, Doga distributed an informative poster on the species throughout its range and identified a network of local conservation groups. Doga maintains hands-on conservation of the species in cooperation with locals and supports the volunteers network throughout the range of the species, particularly in the Kadıncık Valley. Identification of all breeding sites and clarification of the taxonomy of the ‘Taurus fish owls’ are other priorities of Doga.