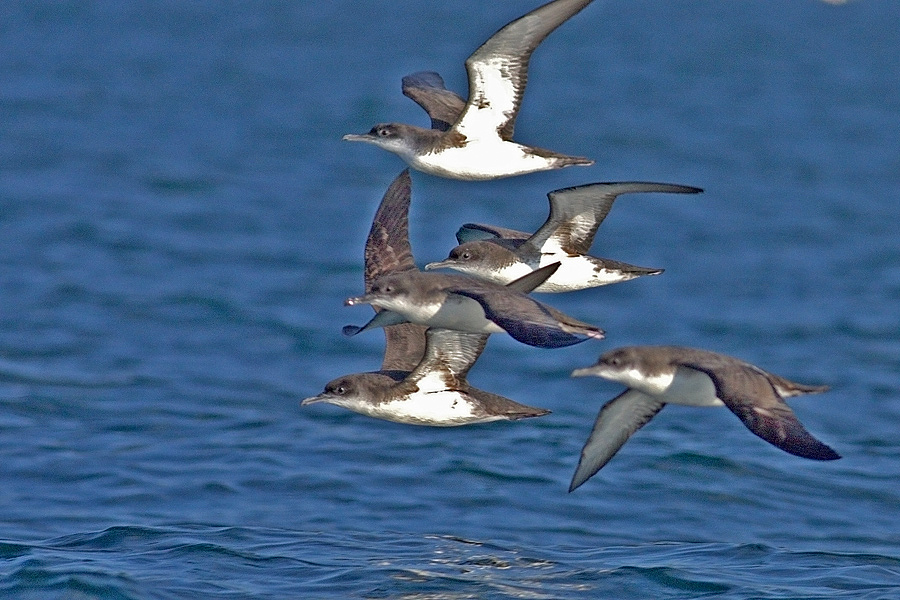 25,000 Yelkouan Shearwaters pass per day at the Bosphorus Strait and more than 14,000 birds per day at Lesvos Island, proving the critical significance of these sites for migration.

The identification of Marine Important Bird Areas along the Southern Black Sea Coast contributed significant data and knowledge to the wider process of establishing and managing marine protected areas along the Black Sea Coast. The project aimed to train staff and volunteers from Romania, Bulgaria and Turkey on seabird research and conservation methods. Intensive fieldwork was also undertaken to ascertain key feeding and rafting areas for Yelkouan Shearwaters and Shag, and all the Shag colonies in Turkey and Bulgaria are surveyed and Marine Important Bird Areas around the most important colonies be mapped and characterized, according to the established Marine IBA methods and criteria.

Yelkouan Shearwater
The Southern Black Sea coast holds internationally important populations of Yelkouan Shearwater (Puffinus yelkouan), which has recently been upgraded on the IUCN Red List to Vulnerable. The Yelkouan shearwater is a seabird species that nests in Mediterranean Sea and winters in the Mediterranean and Black Sea. Many pass through the Bosphorus Strait and the northern Aegean Sea in early spring, a route to breeding grounds in the Mediterranean. They follow the reverse route in late autumn to the wintering grounds in the Black Sea.

To address the need for a coordinated international effort to monitor the species along its migration route, we have joined forces with another BirdLife partner – the Hellenic Ornithological Society based in Greece. In this project, simultaneous counts take place at the Bosphorus Strait and at the Aegean Islands of Lesvos and Lemnos to identify the seasonal significance of these sites for the migration of the species. These counts will enable both partners to identify the most significant marine sites for the species’ migration, and propose their inclusion in the international BirdLife global network of more than 10,000 Important Bird Areas (IBAs).

With the active involvement of birdwatchers from the Bird Watching Community of Istanbul, counts have been held with astonishing results: numbers exceeding 25,000 birds per day at the Bosphorus Strait and more than 14,000 birds per day at Lesvos Island, proving the critical significance of these sites for migration. Following this project, we have expanded the scope of our studies to launch the ‘Seabirds in the Black Sea’ project. For this, BirdLife partners in Romania and Hungary have joined the effort initiated in Greece and Turkey.